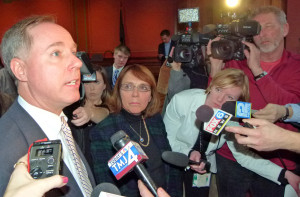 The GOP Assembly caucus elects Pat Strachota of West Bend as their new majority leader to replace Representative Bill Kramer (R-Waukesha), who was ousted from his leadership post amid sexual harassment allegations.

Representative Mary Williams (R-Medford) believes Kramer has lost the trust and confidence of his colleagues, so he has to go.

Speaker Robin Vos (R-Rochester) credits GOP members for acting quickly. “Unanimously deciding that when somebody makes a major mistake — an embarrassing, reprehensible action — we didn’t sit around and let the person stay in their seat or have no repercussions,” He says, “We took immediate action to say that he no longer can represent our caucus, and that’s why unanimous vote shows, he’s out.”

Some female staffers had expressed concerns to Vos about their safety around Kramer, who was allegedly drunk during one instance of harassment, according to Vos, but not the other. 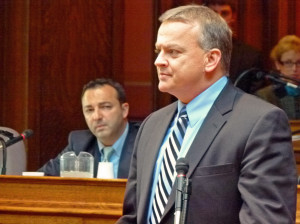 Shortly after Kramer was ousted unanimously by his fellow Republicans, Vos said his caucus is “moving on from a bad situation.” He says, “I think many people in the past had raised concerns about his behavior. But I will say that I never, and I think no one here, ever saw the kind of behavior that was witnessed in Washington D.C. I think that’s why action had to be taken.”

Kramer no longer holds that leadership position, but Vos says his caucus won’t remove Kramer from his Assembly seat. “We are just taking him out of the position of trust that is really earned inside our caucus.”

AUDIO: :34 Vos doesn’t think Kramer should run for re-election this fall, although that decision is up Kramer — and his constituents will decide whether he should remain in office.

The Strachota, 58, is the first female majority leader in the lower house in Wisconsin history. This is her 12th year in the Assembly, and she won’t be seeking reelection this fall. Kramer checked into a treatment facility over the weekend, and there’s no word on when he would be released.