You are here: Home / Brewers / Another Roenicke joins the coaching ranks (Audio) 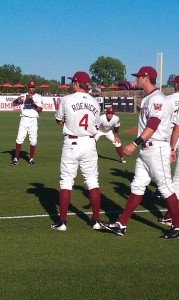 Brewers manager Ron Roenicke will keep an eye from a distance, on his son Lance Roenicke, who has accepted a position as player/coach at Class A Wisconsin (Timber Rattlers).

The emphasis will be on coaching for Lance Roenicke.  He would only play if injuries left the Timber Rattlers short-handed.

Roenicke was drafted in the 25th round of the 2012 draft by the Brewers out of California-Santa Barbara.  He played for a year and a half in the minors, reaching the Brewers high-A affiliate, Brevard County.  In 123 games, Roenicke hit .243 with seven home runs and 41 rbi’s.

The Brewers are trying to add coaches from top to bottom in their minor league system and the offer was made to add Lance Roenicke to the Wisconsin Timber Rattlers coaching staff.  He’ll work under manager Matt Erickson in the Fox Valley.

The Timber Rattlers are scheduled to open their Midwest League season at home against Peoria on Thursday night.

AUDIO: Matt Erickson on bringing in Lance Roenicke to coach :18

AUDIO: Lance Roenicke on how it all came about :18