You are here: Home / Crime / Courts / Arrest made in 1997 Racine County murder 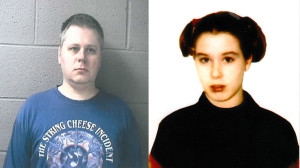 In a set of circumstances that sound like a plot line for a TV drama, Racine County Sheriff Christopher Schmaling outlined how his department came to arrest a 36-year-old man from Illinois for the murder of a 14-year-old girl 17 years ago.

Amber Creek was beaten, sexually assaulted and suffocated with a plastic bag, her body found by hunters in the Kracher marsh in western Racine County in February of 1997. It took 16 months to identify the victim, and although a task force was created to investigate her murder, the case went cold. Fingerprints from the plastic bag and DNA were sent to national data bases without a match, until two months ago, when the Oklahoma State Bureau of Investigation informed Wisconsin investigators that they had matched the prints to those of James Eaton of Palatine.

At a news briefing Tuesday, Schmaling said that information lead to an intense investigation. After several days of surveillance, investigators were able to recover a partially used cigarette discarded by Eaton as he waited for a train in the Chicago area.

DNA on that cigarette matched evidence taken from the victim in 1997. Schmaling said that although an arrest has been made, investigators are urging anyone who has additional information about Creek’s murder to come forward. “We believe that there are people out there that have knowledge of Mr. Eaton and involvement in this particular homicide. I am asking that those people search their heart, do the right thing, and contact the Racine County Sheriff’s Office.