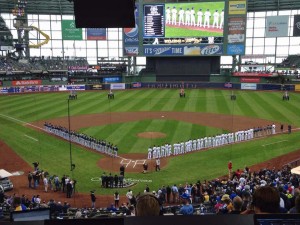 that the club has broken off talks with shortstop Jean Segura and his agent about a potential contract extension.

Segura isn’t eligible for salary arbitration until after the 2015 season and can’t be a free agent until after 2018.  It means the Brewers certainly don’t need to be in any hurry.  But after Segura put together an all-star season (.294) in 2013, the price could be going up.

The Atlanta Braves didn’t do the Brewers any favors after giving their shortstop, Andrelton Simmons a 7-year, $58-million deal over the winter after his first full season in the majors.

It took :58 from the time Atlanta manager Fredi Gonzalez challenged a call in yesterday’s 2-0 loss to the Brewers to the point that it was overturned by umpire Greg Gibson.  It’s the first overturned call of the 2014 baseball season.

Ryan Braun was ruled safe on an infield single, but replay clearly showed that Braun was out and it took less than a minute for replay to confirm that thought.

Yovani Gallardo recorded career strikeout 1,082 when he put down B.J. Upton in the third inning.  That moved him past Teddy Higuera for sole possession of second place on the Brewers all-time list.  Ben Sheets is the Brewers career leader with 1,206 strikeouts.

Francisco Rodriguez recorded his 305th career save by retiring the Braves in the 9th inning.  It puts him in 21st place on baseball’s all-time save list.