The Milwaukee Brewers continue to be the hottest team in baseball, 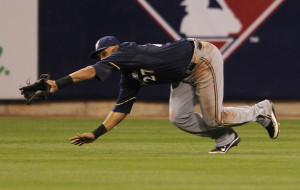 The Brewers hit .320 on the road trip and scored 42 runs in the six games.  Its been a big turn-around after hitting .184 and scoring only 4 runs in the first three games of the season, at home against Atlanta.

Brewers pitching leads the major leagues with a 1.95 ERA and they have the best bullpen ERA at 0.98.

Marco Estrada pitched six solid innings to earn his first win of the season.  He allowed 2 runs on 5 hits while walking two and striking out six.

Ryan Braun continued to have his way against the Phillies.  He had two more hits to finish the 3-game series by going 6 of 12 and driving in 10 runs.

Carlos Gomez had three hits and increased his average to .452 on the road trip.

The Brewers will open a 3-game series against the Pittsburgh Pirates at Miller Park tonight.  On Saturday, Carlos Gomez will be presented his Rawlings Gold Glove Award in a pregame ceremony.  Gomez was the first Brewer to win a Gold Glove since shortstop Robin Young in 1982.