You are here: Home / News / Congressman Petri makes it official 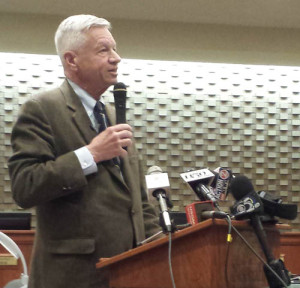 A long time Wisconsin Congressman has formally announced he will not seek reelection this fall.

U.S. Representative Tom Petri (R-WI) made it official Monday, during a town hall meeting in Neenah, that he’s stepping down after more than three decades representing parts of eastern Wisconsin is the state’s 6th Congressional District. Petri said “sooner or later, you either are booted out, die, or retire and I figure 35 years is a pretty good start…no time is perfect, but this is a pretty good time.”

Petri’s office revealed last Friday that the longtime lawmaker was going to retire at the end of his current term. The news came with Petri facing at least one primary challenge from state Senator Glenn Grothman (R-West Bend), who announced a run earlier this month. State Representative Duey Stroebel (R-Saukville) announced over the weekend that he’s entering the race. State Senator Joe Leibham (R-Sheboygan) is also considering running for the seat.

Petri would not say if the challenges from within his own party played a role in his decision, noting that “any decision to retire involves a hundred and one different considerations. There was no particular one thing that was worth singling out over others.”