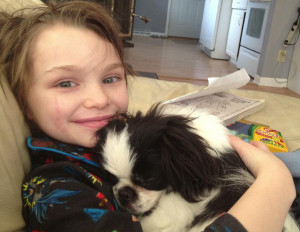 Cannabidiol, or CBD, comes from the marijuana plant. It is touted as a breakthrough treatment for kids suffering seizure disorders. Amylynne Santiago Volker played a big role in getting the legislation passed. Her 9-year-old son Nic experiences multiple seizures each day, rendering him unable to participate in everyday activities, such as having friends and attending school.

“I’m amazed and extremely grateful to have the law passed now. It’s an opportunity for our children to have a new treatment option and a new hope. Not only for the kids, but all the families of kids with seizure disorders.”

Volker, who lives in Dane County, heard about the benefits of the cannabis extract and brought it to the attention of her state representative. “We’re hoping that it will essentially cure Nic of his seizures at some point. That would be the best outcome.” Though, she adds, “Even if it gives 50 percent relief from his seizures, that would be remarkable.”

While the oil comes from the same plant that produces pot, the drug has no hallucinogenic properties of Tetrahydrocannabinol (THC). Governor Walker says the substance will be very controlled. “The bottom line is, this is very narrowly crafted. This is not medical marijuana. It is certainly not legalized marijuana.”

The legislation (AB-726) was introduced by Representative Robb Kahl (D-Monona) and Scott Krug (R-Nekoosa) and received bipartisan support in the legislature. The bill passed the Assembly last month on a voice vote and was later concurred by the Senate.

CBD oil is illegal under federal law. The F-D-A would have to approve its use before it can be made available in the Badger State.

The efficacy of Cannabidiol as a medical treatment received a significant boost last year, when neurosurgeon Dr. Sanjay Gupta reversed his position on medical marijuana and documented the medical benefits of marijuana in his documentary, “WEED.”