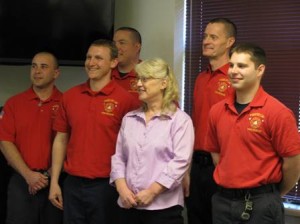 Fond du Lac paramedics and firefighters got a chance to meet a 52-year-old Fond du Lac woman Friday morning who wanted to thank them for saving her life.

Cheryl Zivkovich had already written a letter to Fire Chief Peter O’Leary to thank those responsible for reviving her when she suffered a heart attack on February 17th. The paramedics were called in that day while other crews responded to a house fire.

Cheryl wasn’t breathing and didn’t have a pulse. Paramedic Matt Simon had been working for the fire department for a couple months.  He was doing chest compressions when she came around and yelled at him. “I did chest compressions for maybe 10 to 15 seconds until she started yelling at me that it hurt. So then I stopped chest compressions and started talking to her, doing a little bit more of an assessment on her, just making sure she was still with us.”

Cheryl says she thought at first she was suffering from heart burn then realized it was more serious. She calls the paramedics and fire crew who save her life “My Angels.” She recalls, “They’re my angels. I don’t know if they realize it but,” she directs her message to Simon, “I don’t remember yelling at you and I’m sorry.” Everybody laughs and Cheryl continues, “When I opened my eyes, I had just seen guys … it was like … I went ‘wow, I’m in Heaven.’ It’s like, this is cool.”

Cheryl was taken to St. Agnes Hospital where she was treated and eventually released. She says everything that could have gone right that day did and that’s why she is around to tell the tale.