You are here: Home / News / Hulsey enters race for governor 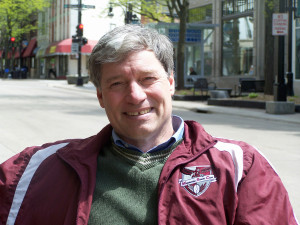 There’s another Democratic candidate in Wisconsin’s gubernatorial race. State Representative Brett Hulsey (D-Madison) announced Monday that he’s making a run for governor. Fresh out of the gate he took aim at the front-runner on the Democrat side, Mary Burke.

“We need somebody who can take on Scott Walker, not some spoiled rich kid,” Hulsey said on WIBA. Like Burke and Republican incumbent Scott Walker, Hulsey said his focus will be on jobs. He said his “Get Wisconsin Working Plan” is “backed up by UW economics professors.”

“We know it will create thousands of jobs, mostly by reversing Scott Walker’s reign of error” Hulsey said. Although he threatened to jump ship from the Democratic party to turn independent last year, Hulsey is running as a Democrat. “I’ve been encouraged that my Democratic colleagues in the legislature have started to realize that they have to fight Scott Walker at every step.”