You are here: Home / Packers / Kuhn set to return to Green Bay 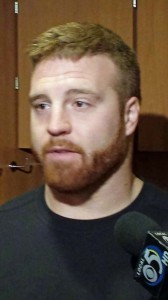 year deal.  It’s expected to be worth just over $1-million.

Kuhn turns 32 in September and outside of Aaron Rodgers, he is the longest tenured offensive player on the roster for next season.

Kuhn has played in 107 of a possible 112 regular-season games since being claimed off of waivers from the Pittsburgh Steelers in 2007.

He has rushed for 506 yards and 12 touchdowns in his eight NFL seasons.