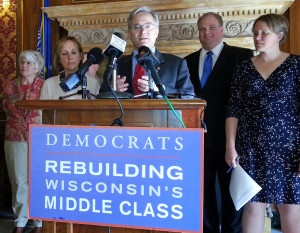 Assembly Democrats want Governor Scott Walker to call for a special session of the legislature.

Assembly Minority Leader Peter Barca (D-Kenosha) says there’s too much unfinished business that needs attention. He wants to have a special session, he says, “on the people’s agenda.”

Barca tells reporters, “It’s safe to say that the governor ran as a centerpiece on jobs. He said he was going to tattoo it on every one of his cabinet secretaries’ foreheads. He said that’s what he was going to put front and center. But somewhere along the line he went astray.”

The governor has already indicated his desire to call lawmakers back to take up voter ID depending on the outcome in the courts. “We”d want to modify that so that a law like that were in effect before the next election.”

Assembly Democrats have outlined an agenda that they say would “strengthen Wisconsin’s middle class, “that includes unemployment benefits, jobs, education, and healthcare.

Assistant Minority Leader Sandy Pasch (D-Shorewood) says, “It’s not too late for Governor Walker and the legislative Republicans to bring us back to the floor to take action that will help expand economic opportunities for individuals and families across our state.”

Pasch says lawmakers don’t need to start campaigning yet; there’s “a lot of unfinished business” to take care of because regular session ended too soon.