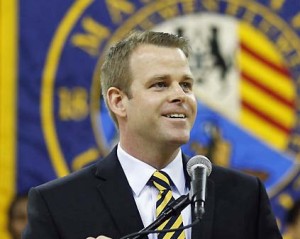 as its next men’s basketball coach.  Wojciechowski was introduced at a news conference on Tuesday afternoon.

Wojciechowski takes over for Buzz Williams, who left for Virginia Tech last month.  He led Marquette to a 139-69 record and five NCAA tournament appearances in six seasons, but missed out on the tournament this year.