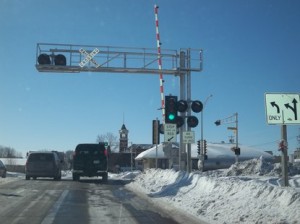 The Maple Avenue railroad crossing in Marshfield has been the site of numerous train and vehicle collisions, including three this past winter alone. Marshfield’s Director of Public Works Dan Knoeck says the Office of the Commissioner of Railroads, the Federal Railroad Commission, and the Wisconsin DOT have met with city officials to encourage a temporary or permanent closure of that crossing. “They were strongly suggesting that we consider a temporary closure of this crossing, and by closure that would be to all vehicle and pedestrian traffic for a period of time to assess whether or not this crossing could be closed permanently.”

Knoeck says the Railroad Commissioner has the authority to close the crossing whether the city agrees or not, and that there would be funding assistance, but only if the city acts voluntarily. “If the OCR issues an outright order to close it, then there is no funding from anybody to help with those closing costs.”

If city officials agree, a trial closure of the Maple Avenue crossing could start in May and last for 60 days; but the Marshfield Board of Public Works postponed a vote on the issue at their meeting Monday night. The want more discussion on both the pros and cons of closing the crossing.