You are here: Home / News / State leaps ahead on spending transparency 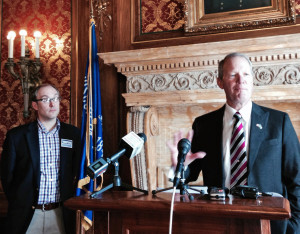 Wisconsin has made big strides in letting taxpayers see where their money is being spent. Bruce Speight with Wisconsin Public Interest Research Group said that’s due to the new OpenBook Wisconsin website, a key initiative by the administration of Governor Scott Walker.

“Wisconsin earns an A- in spending transparency this year,” Speight said. “With the launch of OpenBook Wisconsin in late 2013, Wisconsin saw the largest improvement of any state in the country.” Wisconsin received 90 out of 100 possible points in the state rankings this year. “After being considered a failing state only one year ago, Wisconsin has taken a huge step forward.”

“It was a major undertaking to be able to pull that data from the existing systems that we had,” said Chris Schoenherr, Deputy Secretary of the Department on Administration. “What we have now, no governor had that kind of access before.”

The state’s “online checkbook” is updated every two weeks, and even though the site is new, DOA has posted expenditure information back to fiscal year 2008.