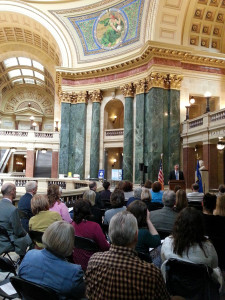 A ceremony at the state Capitol celebrates 30 years since the Victims of Crime Act (VOCA) was signed into law by President Ronald Reagan.

The Victims of Crime Act provides millions of dollars to states across the country. That money is taken from offenders and allows Wisconsin to provide critical services to crime victims without using taxpayer money.

State Attorney General JB Van Hollen says there’s been a lot of progress in the fight, yet there is still a lot of work to be done.

AUDIO: Van Hollen says it’s important to grow the cause for generations to come. :35

Jill Karofsky, executive director of the Office of Crime Victim Services at the Department of Justice sings the praises of the Attorney General’s Statewide Sexual Assault Response Team (SART).

“We’re now working on the Sexual Assault Task force to make sure that no sexual assault victim in this state ever receives a bill for that sexual assault exam, just like any victim of a home invasion would never expect to have to pay for the collection of fingerprints as a result of that crime.”

And, Karofsky says, there will soon be a new position with the DOJ — an assistant attorney general/ violence against women/ law-enforcement trainer, whose only job would be to train law enforcement on protecting victims of crime and sensitive crimes against women.

While a lot has been done, Van Hollen says there’s just no outrage as some crime victims still fall through the cracks. Additionally, Van Hollen says, every day there are so many new ways to victimize people; it’s important to find new ways to provide services to those new victims and to protect them from being victimized in the first place.