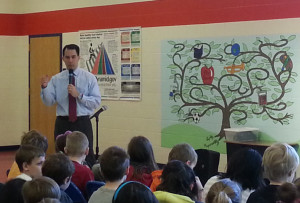 As the University of Wisconsin continues to expand its Flexible Degree Option, Governor Scott Walker says he might be interested in working towards completing his college degree.

Walker never finished the degree he was working on at Marquette University. He left the school in 1990 to take a job in the private sector and never went back to get the remaining credits he needed to finish school. While the UW program does not currently have any options matching the political science degree he was working on, Walker says there could be something that’s close down the road.

Speaking with reporters Wednesday morning during a stop in Middleton, Walker downplayed any link between his interest in finishing school and a possible presidential run for the Republican nomination in 2016. Walker said “I’ve gotten to be governor without it, so I don’t think it’s any base requirement out there.”

Walker indicated that he’s more interested in finishing his degree as a way to generate interest from those whose college education ended early, noting that an estimated 25 percent of the state’s population has some amount of college credit. “I think it’s a good thing to encourage others to do,” Walker said.