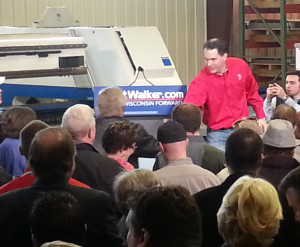 Citing the creation of over 100,000 new jobs in the state since he took office, the nearly $2 billion in tax cuts passed by the Legislature, and a UW tuition freeze, Governor Scott Walker began making his case this morning for another four years as governor.

Walker officially announced his re-election bid during a rally in Dane this morning at a manufacturing plant. The Republican touted the progress made to “turn around” the state during his first term in office, saying “over the last few years we’ve had to make some tough decisions…but the good news is they’ve paid off.” Walker says he’s not done yet, and he wants his second term to focus on efforts to “reduce the dependency on government and increase the dependency on hard work and personal pride.”

Walker faces a challenge from Democrat Mary Burke, a former state commerce secretary and executive at the Trek Bicycle company. In statement from her campaign, Burke said “Under Scott Walker, Wisconsin is falling behind. In job creation, we are 35th in the country and second to last among Midwestern states. Worse still, we are one of the worst in the country in new business starts.”

Walker pledged during his 2010 campaign that he would help the state create 250,000 jobs during his first term. It’s a promise Walker is expected to fall short on fulfilling and one Democrats are likely to hit him on along the campaign trail. Walker did not mention the pledge Tuesday while kicking off his re-election effort.

Walker was joined by Lt. Governor Rebecca Kleefisch, who also announced she is seeking another term.