You are here: Home / Sports / Wardle gets new 5-year deal at Green Bay 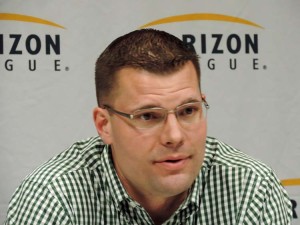 this past season, the University of Wisconsin-Green Bay has rewarded head coach Brian Wardle with a new five-year contract.

Green Bay won 24-games this past season but missed out on the NCAA Tournament after being upset by Milwaukee in the Horizon League Tournament semifinals.

With a 14-2 league record, Wardle led the Phoenix to their first regular season conference title since 1995-96.

Wardle has been Green Bay’s head coach for the last four seasons, compiling a 71-56 record.  Wardle also spent five seasons as an assistant at Green Bay.

Wardle also announced today that Brian Barone has been promoted to Associate Head Coach.  Barone joined the program as an assistant coach prior to the 2010-11 season and has worked on Wardle’s staff for the past four seasons.