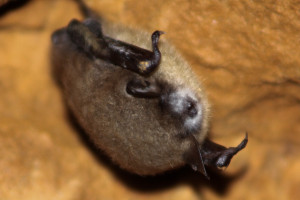 One of the Wisconsin bats found with white-nose syndrome. (Photo: WDNR)

A fungus that has killed almost six million bats since 2006 has arrived in Wisconsin. The state Department of Natural Resources says that white-nose syndrome was found in 11 bats hibernating last month at an old mine in Grant County.

The DNR’s Erin Crain calls it a “sad day for Wisconsin,” because farms, forests, and people could face new problems from what’s feared to be a potential loss of bat species. Bats protect people by eating insects which damage farm crops, and transfer diseases like West Nile. Experts say up to a half-million bats hibernate in Wisconsin each winter before spreading out to other Midwest states.

White nose syndrome was first discovered in New York eight years ago, and has spread throughout the U.S. and northeast Canada. For a long time, the DNR has warned that Wisconsin would get the disease eventually. It’s been found close to the Badger State in recent years in Illinois and Iowa.

The Wisconsin discovery was made near the end of the DNR’s fourth annual inspections of caves where bats hibernate. Secretary Cathy Stepp says the Grant County discovery appears to be isolated — but experts say the mortality rate will grow once white nose gets a foot-hold.

Wisconsin is the 23rd state to confirm the presence of the disease.