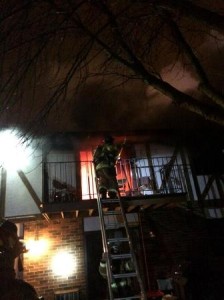 A 27-year-old Fond du Lac man has been arrested for setting an apartment complex fire that displaced four families. The blaze early last Friday morning destroyed one apartment and damaged three others in the 12-unit Home Town Harbor apartment complex at 362 N. Seymour Street. The fire started in a second floor apartment. Assistant Police Chief Steve Klein says an argument between the suspect and an apartment tenant precipitated the fire.

No one was injured. The suspect was arrested Wednesday and faces arson, burglary and criminal damage to property charges. Fire Chief Peter O’Leary credits the joint investigative work of his department, the police department and the State Fire Marshal’s Office.

The blaze destroyed the apartment where it was set and smoke damage rendered three other apartments in the 12-unit complex uninhabitable. O’Leary says firefighters did a good job preventing the fire from doing even more damage. O’Leary says no official damage estimate has been given, but between the damaged apartments and personal items it has to run into the hundreds of thousands of dollars.