You are here: Home / News / Brain drain linked to lack of transportation options 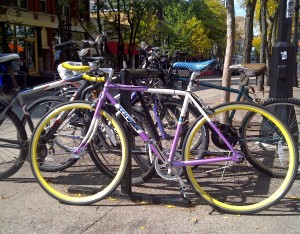 One survey links Wisconsin “Brain Drain” to a lack of transportation options.

The millennials generation is seeking alternatives to driving, according to a new study by WISPIRG. The group’s director Bruce Speight says state and federal leaders need to change their spending priorities.

“Our state transportation budget is out of touch with the way young people are getting around and the transportation future that they seek.” He says, “State leaders need to reform transportation priorities or risk losing the young talent and educated workforce that are critical to our future economic prosperity.”

Speight cites studies indicating millennials put greater emphasis on locating to areas with more amenities and better transportation options. “Over the past ten year, a time when Wisconsinites have been driving less,” he says, “and seeking other transportation options, state leaders have cut funding for transit and other non-driving modes (of transportation), while state spending on highways and highway expansion has increased greatly.”

WISPIRG is calling on state leaders to increase funding for the transit, bike, and pedestrian infrastructure that, he says, more millennials are demanding. Speight says money can be saved by cutting back or cancelling unneeded highway expansion projects.

WISPIRG Foundation surveyed 530 college students at 14 Wisconsin campuses, and 84 percent of respondents said that it was either “very important” or “somewhat important” for them to have transportation options other than a car to get around.