You are here: Home / News / Click It or Ticket gets under way 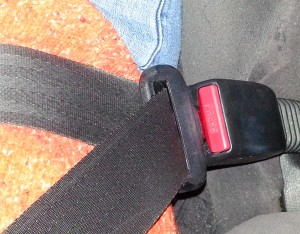 You better buckle up, or else. Nearly 400 law enforcement agencies throughout Wisconsin are more closely watching for motorists and passengers who aren’t wearing safety belts, during the annual Click It or Ticket mobilization.

David Pabst is director of the Wisconsin Department of Transportation’s Bureau of Transportation Safety. “After a long winter, we are now entering into the warmer season, and tragically with that, we also enter into the season of higher fatalities on our roadways because traffic volumes increase as well do the speeds. So that’s why more than ever we need everybody to buckle up, every day, every trip.”

Berg says there is still a lot of work to do to increase compliance with the mandatory safety belt law. “Hundreds of law enforcement agencies around Wisconsin will mobilize for the annual Click It or Ticket campaign. The goal during this mobilization and throughout the year is not to write more tickets, but to saves lives and reduce injuries by getting more people to voluntarily buckle up.”

Berg says state safety belt use rates trail the national average of 87 percent. Seat belt use in Wisconsin also trails behind all neighboring states, with rates in the 90s. In addition to increased law enforcement efforts during the Click It or Ticket campaign, WisDot is using federal funding and the celebrity status of Green Bay Packer star Donald Driver in an ad campaign urging everyone to buckle up.

Wisconsin has primary enforcement, with a $10  fine for violators.

Click It or Ticket kicks off intensified safety belt enforcement, starting Monday, May 19 and going through June 1.