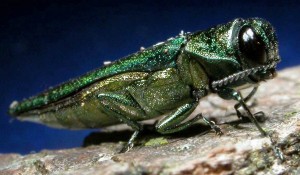 It appears to have been wishful thinking that Wisconsin’s long and cold winter may have hampered the spread of an invasive tree killing beetle.

Wisconsin Department of Agriculture Trade and Consumer Protection spokeswoman Donna Gilson says the Emerald Ash Borer appears to have survived. Even with record cold temperatures across much of the state this winter, she says “it just wasn’t cold enough long enough, believe it or not, to really put a serious dent in the population.”

Gilson notes that the native range of the EAB goes all the way up into Siberia, so they are used to severe winters.

The state is marking EAB Awareness Week, an effort aimed at kicking off the summer travel season by informing the public about the dangers of spreading the insect. Gilson reminds people to keep an eye on where their firewood is coming from, and to never transport firewood or other wood products out of quarantined parts of the state. She says “not only emerald ash borer, but gypsy moth eggs and oak wilt, those are the three biggies. You can move a lot of pests on firewood to new areas of the state that don’t currently have those pests.”