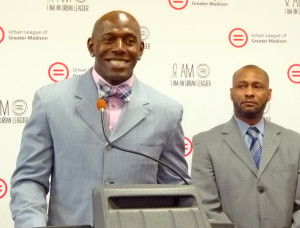 Nearly 400 law enforcement agencies in Wisconsin will be on the lookout for unbuckled drivers and passengers during the annual Click It or Ticket mobilization. Former Green Bay Packer Donald Driver makes a stop at the Urban League of Greater Madison to help to get the word out. He’s the face of the annual Memorial Day seat-belt enforcement campaign for the third consecutive year.

Driver tells the story about how Ashley, a family friend, lost her life in a car crash. She was not wearing her seat belt. “It makes you appreciate life so much more.”

The all-time leading receiver for the Packers and Dancing with the Stars champion says he always makes sure his kids are buckled up — in the appropriate car seat — no matter how short the drive. “Even though my house is only three minutes from where my daughter goes to school, in those three minutes anything can happen. We sometimes think that ‘Oh, it won’t happen. It’ll be OK. I’m only going around the corner.’ That’s what Ashley thought,” he says, “She only went across the street to the gas station. On her way crossing the street, she lost her life.”

AUDIO:  Driver recalls a recent visit to Dallas, when he noticed someone holding a baby in a vehicle. 1:41

Officials say whenever officers see an unbelted motorist, they will stop the vehicle and issue a citation. Wisconsin has primary enforcement, which means a motorist can be stopped solely for not wearing a safety belt. In the past, drivers had to be stopped for another traffic violation before a ticket would be issued for a seat belt violation. That fine is $10 for violators.

Approximately one out of five motorists in Wisconsin does not wear a safety belt, according to the state DOT, and more than half of drivers and passengers killed in crashes last year were not buckled up.

Click It or Ticket kicks off intensified safety belt enforcement, starting Monday, May 19 and going through June 1. TV ads have already begun airing and Driver will also be in statewide radio and online messages urging motorists and passengers to buckle-up.