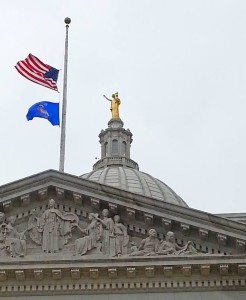 Flags will be at half-staff starting today in honor of Wisconsin’s 38th Governor, Patrick Lucey.

Lucey died Saturday at the age of 96. He grew up along the Mississippi River in Ferryville, and graduated high school in Prarie du Chien. The Democrat served as the state party chairman when John F. Kennedy was running for President. Lucey also has the unusual distinction of being elected Lieutenant Governor for one term in 1965 while Republican Warren Knowles was elected Governor prior to the 1967 Wisconsin Constitutional Amendment combining the Governor and Lieutenant Governor’s race in to a single election.

Lucey ran against Knowles for Governor, but lost, and later won the Governor’s job in 1970 becoming Wisconsin’s first Governor with a four year term after another Constitutional amendment. He left midway through his second term to accept a Presidential appointment as Ambassador to Mexico.

Governor Scott Walker says, “Governor Lucey was a dedicated public servant who loved Wisconsin and his country. His life was spent serving first in the United States Army, the Wisconsin State Assembly, as the Lieutenant Governor, as Governor, and finally as Ambassador of the United States to Mexico. Tonette and I extend our thoughts and prayers to the family of Governor Patrick Lucey, and I join with all Wisconsinites in honoring his legacy.”

Flags of the United States and of the State of Wisconsin will remain at half staff until the date of his burial.