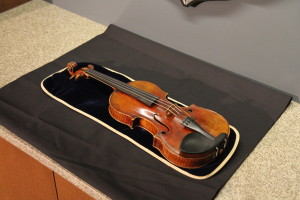 A Milwaukee man pleaded guilty this morning to his role in the theft of a rare Stradivarius violin. 36-year-old Universal Allah was convicted of being a party to felony robbery, while a second charge of possessing marijuana with the intent to sell it was dropped in a plea deal.

Allah was accused of supplying the stun gun that was used to knock out Frank Almond, the musician who was caring for the $5 million instrument, following a concert in late January at Wisconsin Lutheran College. The 300-year-old violin was recovered nine days later, hidden in a suitcase in the attic of a Milwaukee home.

A second defendant, 41-year-old Salah Salahaydn, has pleaded not guilty in the case, but his attorney has requested a new hearing. He’s scheduled to be back in court on June 30. Salahadyn is currently charged with felony robbery.

Allah will be sentenced on July 24th and could face up to ten years in prison. Prosecutors also asked that Allah be placed under extended supervision for three years after he gets out.