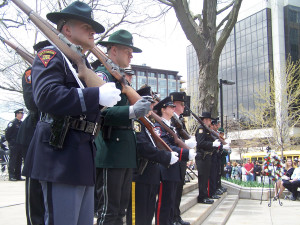 Law enforcement from around the state gathered at the state Capitol Friday to honor fallen officers.

Governor Scott Walker thanked officers for all they do and for putting themselves in harm’s way on a daily basis. Walker said “it’s important to remember not only those fallen heroes who paid the ultimate sacrifice…but to thank every other man and woman who serves in law enforcement today.”

Dane County Sheriff Dave Mahoney praised his fellow officers as “the best out communities have to offer,” and urged each of them to remember the solemn oath they took when they entered law enforcement.

More than 265 Wisconsin police officers have their names inscribed on the memorial.