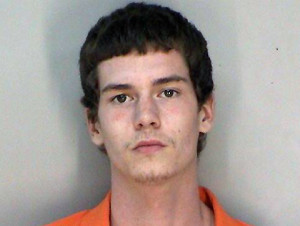 A New London man is being held in the Waupaca County jail on a $200,000 cash bond, on charges stemming from fires set at an apartment building and school playground earlier this week. 19-year-old Jesse McLamarrah is charged with two counts of attempted first degree intentional homicide, three counts of first degree recklessly endangering safety, arson of a building, arson of other property, and burglary.

The complaint alleges McLamarrah threw a lighted sock soaked with gasoline in a vase into an apartment door above the Copper Shots Bar around three Tuesday morning. He told authorities he was mad at a tenant inside over his failure to pay back a loan. Two occupants of an apartment escaped the fire by jumping out a 2nd story window. They suffered significant injuries and were taken to New London Family Hospital.

The complaint also alleges McLamarrah then went to a New London school and lit a playground set on fire.

If convicted, he could face over 150 years in prison. McLamarrah is due back in court on Tuesday.