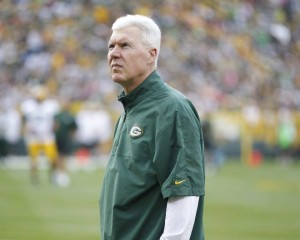 conference.  Thompson didn’t divulge anything with regards to next weeks draft, he did talk about the acquisition of pass rushing defensive end Julius Peppers.

Thompson was asked about Peppers age (34) and whether or not he is slowing down.

“Well, 34 is not so old,” said Thompson.  “There’s no evidence of any decline in his play, in our opinion.  He still has the same athletic traits that he had coming out.  He’s had a remarkable history in the NFL in terms of durability.  We’re looking forward to it.  I think he is too.”

AUDIO: At 34, Thompson thinks Peppers has plenty left in the tank :20

AUDIO: Thompson to those that think he doesn’t like free agency :17