When the Green Bay Packers  make their first pick in tonight’s NFL Draft, it’s expected they’ll be thinking about finding a play- 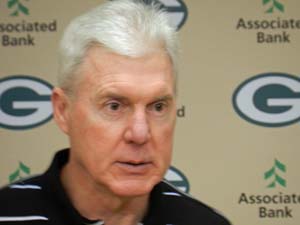 maker on the defensive side of the football.

General Manager Ted Thompson has the 21st pick in the first round tonight and there’s four players at two positions that he will have an eye on.  Will inside linebackers C.J. Mosley (Alabama) and Ryan Shazier (Ohio State) still be around when the Packers selection comes up.  The same goes for safeties Ha Ha Clinton-Dix (Alabama) and Calvin Pryor (Louisville).  Most observers think it’ll be a close call.

Shazier could be the most likely of the four to make it to number-21 and it’s expected that Ted Thompson, who is entering his 10th NFL Draft as the Packers General Manager, will snap him up.

Shazier’s strength is his speed and ability to blitz and make plays.  The Packers have lacked that type of player in the past and their performances against San Francisco (Colin Kaepernick) and Seattle (Russell Wilson) is proof of that.

The safety position is coveted as much as inside linebacker by the Packers.  The Packers lacked greatly in that department and have struggled since the injury loss of Nick Collins.

If Clinton-Dix and Pryor are both gone, as well as the linebackers, the Packers could consider Northern Illinois safety Jimmie Ward.  Ward is considered to be the best athlete at the position, but not as big as the other two.

The Packers have nine selections in the 3-day, 7-round draft.  They’ll pick once in round 2 and twice in round 3.  It gives them four selections among the top 98 players, in a draft that is considered very deep.

Look for the Packers to put an emphasis on tight end and wide receiver help as well.  The Packers could use a pass catching tight end after Jermichael Finley went down and the Packers may not resign him.  The Packers have also lost a pair of talented receivers to free agency in each of the last two years (Greg Jennings & James Jones) and could stand to add some depth there as well.