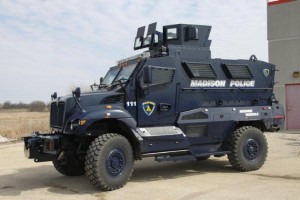 Madison, Appleton, and Neenah are all adding new Armored Rescue Vehicles, obtained for free through the U.S. Department of Defense. It’s raising some questions about the tactics officers will use when responding to threats, although Madison Police Captain Victor Wahl says they sought out one of the vehicles so they could provide officers with a life-saving tool.

“It doesn’t change how we treat citizens or how we view conflict resolution,” Wahl says. “It’s just a truck. It just provides us with some protection and it doesn’t change the core of what we do or what we believe as a police department.”

Wahl says it will mainly be used in situations where officers could face a higher level of danger, such as serving warrants where they believe weapons will be involved. He says it’s not going to be used every day or as part of routine patrols.

Many cities similar in size to Madison have already had armored vehicles for years. Wahl says his department was relying on one owned by the Dane County Sheriff’s Department, which it was borrowing at least twice a month.