You are here: Home / Packers / Raji made his bed, now he has to sleep in it (Audio)

Defensive lineman B.J. Raji had an offer from the Green Bay Packers early last season that would have paid him $8-million dollars.  But Raji 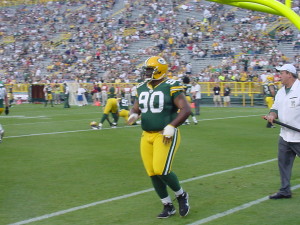 decided to wait, then went on to post the worst statistical season of his career.  Before the season ended, the offer was off the table.

Raji finished with 17 tackles (12 solo) and no sacks for the second straight season.  That was last among defensive lineman.

Raji hit the free agent trail and while he claimed he had better offers elsewhere, decided Green Bay was the best fit for him and he returned for $4-million, half of the teams original offer.

Raji said returning to Green Bay wasn’t a deal of having to settle for what’s left.  He said its a situation of taking the best situation for him and that’s with the Packers.

Raji will return to the true nose tackle position this season.

AUDIO: Raji on why nose guard is better for him :14

When Raji played across from the center back in 2010, he had 39 tackles and 6.5 sacks.  He’s hoping a return to that spot will see some of those numbers return.  But while the numbers weren’t there, he wasn’t complaining or trying to get the coaches to move him.

AUDIO: Raji said there were no discussions about his moving back :20

Raji knows this season is his chance to prove he deserves a long-term contract.  He’ll have to put up some big numbers this season to insure he’ll get that chance.