You are here: Home / Fires/Accidents/Disasters / State office building could be closed for weeks 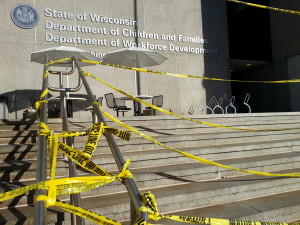 State officials say a government office building in downtown Madison could be closed for eight weeks or more, after a fire caused extensive damage last week. The Department of Administration says the lengthy closure of the GEF1 building is needed so crews can complete clean-up and make repairs from the fire.

An investigation found the fire on the fourth floor of the building was accidental and likely the result of an electrical fault or failure. The building was last inspected in December and was due for another check at the end of June.

GEF1 houses the Department of Workforce Development and Department of Children and Families, both of which are operating out of alternate locations currently. DOA spokeswoman Stephanie Marquis says most employees will have long-term work sites set up by the end of the month.

Marquis says staff is being kept out of the building until the clean-up is complete and the ventilation system has been cleared. However, both agencies will be able to retrieve equipment, files, and other materials that are crucial to their operations.