You are here: Home / Packers / Thompson says he has a lot left in his tank 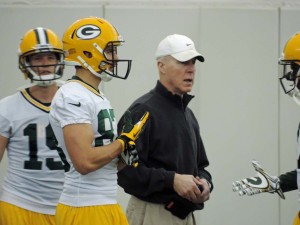 indication that he intended to fulfil the rest of his current deal and maybe more.

Two weeks ago, during a pre-draft news conference, Thompson didn’t appear himself, which led to speculation that his 10th NFL Draft in Green Bay could be his last.

But Saturday, the 61-year old Thompson was nothing like he was two weeks ago.  When asked if he can say with certainty that he will work through the 2016 draft.  “Certainty is a fairly strong word,” he said.  “I’m feeling good and ready to go.”

Thompson’s current deal was done in 2010, before the Packers won the Super Bowl.  His deal had two years left at the time and had three additional years added to it.

AUDIO: Ted Thompson said he has more left in the tank :18

After the draft concluded a week ago, Thompson went out of his way to thank members of his staff for their hard work.  There were some that believed Thompson was on his way out.

AUDIO: Thompson thanking his staff for their work is not a sign that he wants out :17