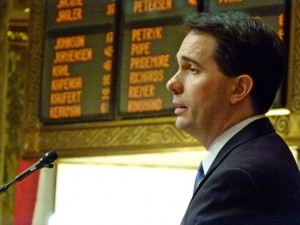 Jay Heck with Common Cause Wisconsin says it’s probably best to get closure. “The longer this drags on, the tougher it’s going to be to get this out of the minds of voters when they go to the polls in early November.”

An editorial in the Wall Street Journal first reported on Wednesday Walker’s attorney is negotiating with prosecutors on a settlement. The Associated Press said an anonymous source confirmed it.

Heck speculates the Walker campaign is thinking about short-term political interests. That means, getting this issue off the radar screen sooner rather than later. “You know, I think the way the Walker people may look at it is that if they can get some kind of settlement and closure to this ongoing criminal investigation with regard to possible illegal collusion with outside groups, and do it soon before the election, it won’t be an issue in the election.”

The John Doe recall investigation began in mid-2012, looking into alleged illegal campaign coordination between outside groups, Walker, and other GOP recall candidates.

Walker faces Democrat Mary Burke in the gubernatorial election in a little more than five months.  The latest Marquette poll shows the governor tied with Burke.