You are here: Home / Sports / Whitewater adds to its stable of championships

When it comes to winning NCAA Championships, UW-Whitewater is as good as they come. 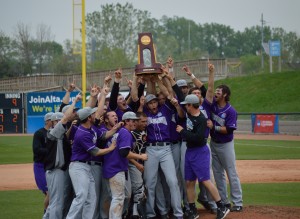 The Warhawks are celebrating their second NCAA Division 3 baseball championship on Tuesday at Fox Cities Stadium, pulling out a 7-0 win over Emory (GA).  They also won the College World Series title back in 2005.

Yesterday’s win allowed the Warhawks to become the first and only school in NCAA history, at any level, to win the trifecta.  That’s football, men’s basketball and the baseball championships, all in the same academic year.

In 67 years of NCAA competition, no school has ever accomplished the feat.

The Warhawks finished with 11 straight wins and a 44-7 record.