You are here: Home / Education / Wisconsin college student gets letter from Obama 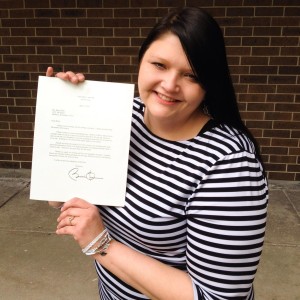 A college student in Wisconsin hoping to end racial disparity gets a message from the president.

Madison College student Betsy Pelto gets an official surprise from the White House. “When I got the letter back from President Obama it was shocking,” she recalls, “The post man walked up and handed it to one of the kids.” Her neices and nephews were visiting at the time. “He looked at it and said ‘it’s from the White House Betsy!’ I said ‘no!’ He said ‘Yes! It’s probably from Obama!’ I said ‘No way!'”

A few months ago, Pelto wrote a letter to President Barack Obama asking for his help in stopping racial disparity in Wisconsin, which has recently been rated as the worst state in the nation for black children. “The statistics are really scary to me. I’m a parent of two biracial children. I’m concerned for their future, for my community’s future, for their friends, our family.”

AUDIO: Betsy recalls her reaction upon receiving the letter. :53

Madison has frequently been rated among the best places to live, while other studies show a racial disparity. Pelto says that’s what bothers her the most. It’s the wide difference in studies and accolades. “It just doesn’t seem fair. If we’re a great place to live, then we should be a great place to live for everyone, not for just an elite society.”

The president wrote back saying he supported her goals. Pelto says she is “honored and humbled” to have had that correspondence with our country’s leader.