You are here: Home / Military / Wisconsin soldier dies in Kosovo 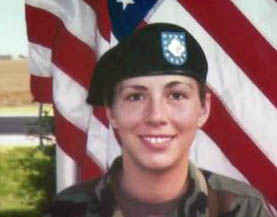 The family of a Wisconsin soldier says their daughter has died while serving overseas. WLUK-TV in Green Bay reports that the father of U.S. Army Sergeant Heidi Ruh said the 33-year-old died Friday. Ruh was stationed on a base in Kosovo.

The military told the family she was fatally shot while on base. But that’s all the army will say. “It’s been very hard. The worst part is not knowing anything. All we knew was that she had been shot and killed,” Scott Ruh told WLUK.

Ruh said army officers came to his home in the town of Newton Friday afternoon with the news, which he said the family still doesn’t fully comprehend at this point. Ruh says his daughter had been in the Army for 11 years and worked in a medical unit, repairing surgical machines. The volunteered for the Kosovo assignment and had been there since February.

He says the Army won’t tell him anything else about her death; only that it’s under investigation. Besides her parents, Scott and Catherine, Ruh is also survived by two sons, ages eight and eleven. Her family says the boys live with Ruh’s ex-husband and his family in Arkansas.