You are here: Home / Military / 70th anniversary of D-Day 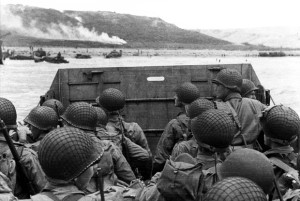 American assault troops in a landing craft approaching the Northern Coast of France on June 6, 1944 (Photo: US Army)

Commemorating the 70th anniversary of the invasion of Normandy.

The day of the Normandy landings, D-Day, has been called “the day that saved the world.” University of Wisconsin-Madison Military History Professor John Hall says that’s an over-simplification.

“It is a critical event in the war; I think to say that it is the one event that wins the war for the allies is probably an exaggeration.” He stresses, “D-Day is hugely important in terms of speeding the destruction of the Third Reich.”

More than 160,000 allied troops landed on the beaches of Normandy, France on this day 70 years ago, to fight Nazi Germany. More than 9,000 allied soldiers were killed or wounded.

D-Day is a common designation in military lingo; however, considering it is synonymous with June 6, 1944, some folks mistake it to mean “death” day or some other variation.

Hall explains it’s the day on which a combat attack or operation is to be initiated. “It makes it a fairly arbitrary point in time so that if they have to shift the operation due to weather or new intelligence or anything like that, all of the times in the plan remain exactly the same because they are defined by a variable rather than a fixed point in time.”

While the term is routinely used, Hall says the military attack 70 years ago to liberate western Europe from Nazi occupation during World War II is the only instance in which that designation has entered popular lexicon as a proper noun. That deadly invasion is precisely what Americans think of when hearing the term, even though many other operations — before and after that historic invasion — had a designated D-Day.

A ceremony marking the 70th anniversary of D-Day is scheduled for noon in the Capitol Rotunda.

Statement from the governor:

Governor Scott Walker issued a proclamation today commemorating the 70th anniversary of the World War II Normandy invasion, commonly referred to as “D-Day”, which marked the beginning of the end of the war in Europe.  Approximately 320,000 men and 9,000 women from Wisconsin served in the armed forces during World War II and 8,390 Wisconsinites gave the ultimate sacrifice.

“Today, we remember the monumental courage, devotion, and skill displayed by those who stormed the beaches of Normandy 70 years ago to fight for the end of Nazi tyranny over the oppressed people of Europe and guarantee our security and freedom,” Governor Walker said.  “D-Day significantly changed the course of the war, and we will never forget those who were lost on that historic day.  We remember those who died and honor all who served.”

Related: Remembering D-Day at the Capitol