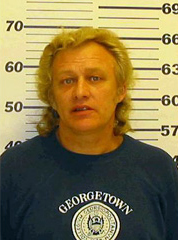 The man accused of trying to skin his dog alive is out of jail.

Charles Weissmiller, 65, signed a $3,000 signature bond Wednesday, and is currently out of the Clark county jail and back at his Stanley residence.

The dog named Sammy had been severely cut, and had lost both flesh and fur. The complaint says Weissmiller admitted he harmed the Labrador-Shepherd mix because he no longer wanted it.

Sammy is doing much better, thanks to the generosity of the community and Police Chief Andrew Schade. The Owen chief has paid over $1,000 so far to cover several surgeries by the veterinarian. Sammy has many bandages and is being cared for at a foster home.

As for Weissmiller, he has been ordered to stay away from all animals and come back to court July 24th for a preliminary hearing on felony animal abuse charges.

A fund has been set up to accept donations for Sammy’s veterinary care at Time Federal Savings Bank. If donations exceed the cost of care, the extra money will be donated to the Clark County Humane Society.