You are here: Home / Fires/Accidents/Disasters / Another stormy day for southern Wisconsin 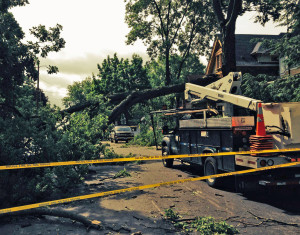 There was little rest for residents of southern Wisconsin on Wednesday morning, as another line of severe storms swept across the region.

Several communities reported downed trees and power lines, in a line stretching from La Crosse to Madison to the metro Milwaukee area. As of 10 a.m. Wednesday, more than 17,000 utility customers were still without electricity. The storm also triggered a tornado warning for Dane and Jefferson counties, although no touchdowns were reported.

The morning bout of severe weather comes a day after the National Weather Service confirmed six tornadoes touched down in the state between Monday evening and early Tuesday morning. Dane County saw EF-1 and EF-3 tornadoes, Grant County was hit with EF-1 and EF-2 tornadoes, and there were two EF-1 tornadoes reported in Green County. While some minor injuries were reported, there were no fatalities. The storms did cause a significant amount of damage to dozens of homes, tearing off roofs and knocking down the wall of an elementary school in Verona.