You are here: Home / Brewers / Brewers rule the road

The Milwaukee Brewers continued their road dominance with a 6-5 win over the Colorado Rockies in Denver on Sunday.  The Brewers wrapped 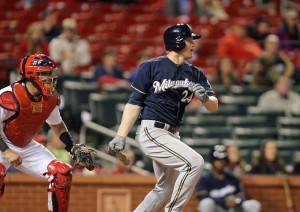 up a 6-1 road trip by sweeping the Rockies, improving to 27-15 away from Miller Park this season.  That is the best road mark in the majors.

On Saturday, the Brewers scored three runs on a wild pitch.  Yesterday, Colorado’s Corey Dickerson tripled and tried to score on a throw that got away.  But Dickerson tripped and fell on his way to the plate and was thrown out, allowing the Brewers to hang on for the win.

The sweep of the Rockies is just the second over Colorado in Denver.  The first came back in 2004.

The Brewers improved to a season best 17-games over .500 at 47-30, that’s the best mark in the National League, and only a half-game behind the Oakland A’s for the best overall record in baseball.

Kyle Lohse worked only 5-innings, allowing 3 runs on 7 hits.  But Lohse still earned the win and improved to 9-2 on the season.  Lohse walked three and struck out three.

Aramis Ramirez and Lyle Overbay (pinch hit) both homered for the Brewers in the victory.

The Brewers are back home to host the Washington Nationals at Miller Park tonight.  Matt Garza (4-4, 4.02) pitches for the Brewers.  Gio Gonzalez (3-4, 4.85) goes for the Nationals.