You are here: Home / Sports / Bucks land Kidd for pair of second rounders 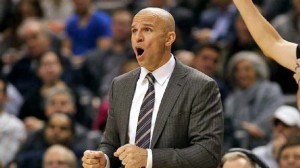 teams agreed to compensation.  The Milwaukee Journal Sentinel sites a league source as saying Kidd will sign a three or four-year deal and the Bucks will send a pair of second round draft picks to the Nets in return.

Kidd will replace Larry Drew, who coached just one season in Milwaukee and finished 15-67.  He still had two years left on his three-year deal worth $7.5-million.

Kidd had reportedly asked for more power in Brooklyn and was denied.  That led to his interest in the Bucks.

The Journal Sentinel report says John Hammond will remain as the Bucks general manager and David Morway will stay on as assistant general manager, despite both not being consulted on the move to hire Kidd.

Kidd was also unhappy when he saw former NBA players Steve Kerr and Derek Fisher signing deals that paid considerably more money.  He was entering the second year of a four-year, $10.5-million deal he signed to coach the Nets.  He coached the Nets to a 44-38 record and sixth seed in the NBA playoffs.  The Nets beat Toronto in the opening round, then fell to Miami in the Eastern Conference semifinals.