You are here: Home / Sports / Bucks select Parker with No. 2 overall pick

The Milwaukee Bucks wanted Duke’s Jabari Parker and Parker made it perfectly clear that he wanted to play for the Bucks.  The match made in 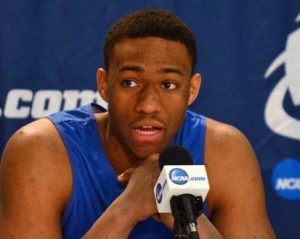 heaven became reality when Cleveland used the top overall pick in the draft on Kansas Jayhawk Andrew Wiggins.  The Bucks then grabbed Parker with the second overall selection.

The Bucks ownership team of Marc Lasry and Wes Edens couldn’t be happier.  They get a player that has excellent character and is ready to play and contribute immediately.  And even more importantly, Parker wants to play in Milwaukee.

Parker can play either forward spot, big or small and he’s already drawing comparisons to NBA greats like Paul Pierce and Carmelo Anthony.

Many of the so-called draft guru’s give the Bucks a top grade for the Parker selection.  They say he’s an immediate contributor, a player that will average 20-points a game in the NBA and be a All-Star.

AUDIO: GM John Hammond said Parker is a great fit with the Bucks :12

The Bucks weren’t done at the forward position after picking Parker.  They added 6’8, 240-pound forward Damien Inglis with the 31st selection, the first pick of the second round.  They followed that by picking LSU power forward Johnny O’Bryant with the 36th pick.

The Bucks wound up the night by selecting Pittsburgh guard Lamar Patterson 48th overall, then traded him to Atlanta for a 2015 second round pick.