You are here: Home / Business / Burke highlights need for entrepreneurship 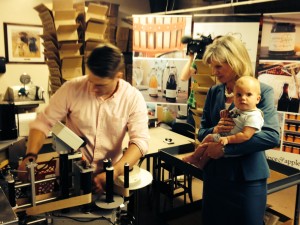 Mary Burke says she’ll do better than Governor Scott Walker when it comes to supporting entrepreneurs in Wisconsin. The Democratic candidate for governor stressed that during a campaign stop at a small business in Madison.

“We’re 46th in the country under Governor Walker in terms of new businesses being created,” said Burke at Quince and Apple, a maker of small batch preserves and syrups located in a business incubator near downtown Madison.

Burke said the state needs more business such incubators, along with improved access to capital.

“Capacity is limited at this point, and for Wisconsin to really move the needle . . . we need to increase that capacity a lot,” Burke said.

Burke, a former Trek Bicycle executive and state commerce secretary, has a jobs plan that she claims will help to encourage the growth of small businesses, which provide for most new jobs in the economy.