You are here: Home / Health / Medicine / Calls for Congress to recognize obesity as disease 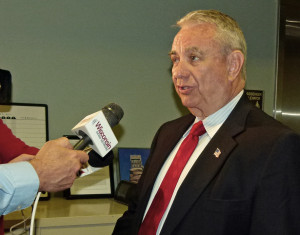 Obesity-related chronic diseases are a primary driver of health costs — and deaths — in the US, according to the Centers for Disease Control (CDC).

At a stop in Michigan’s Capitol, former Wisconsin Governor and U.S. Health Secretary Tommy Thompson admits Midwesterners love to eat. “And we like to have a good time, we like to have a couple beers,” and he says, “In Wisconsin we eat brats a lot. I’m not saying you can’t eat brats or drink beer … you have to do it in moderation. Instead of going back for a second or third helping, it’s better to stick with one.”

Thompson says we must take personal responsibility, but that’s not enough. An estimated 75 percent of health care spending goes toward chronic diseases that could be prevented by treating obesity.

Thompson is urging Congress to pass the “Treat and Reduce Obesity Act of 2013,” requiring Medicare to cover the cost of treating obesity. “We feel that it’s necessary to pass the law so doctors are able to prescribe medicines … to treat the patient.”

Treating obesity early is less expensive than treating many obesity-related chronic diseases, such as asthma, diabetes, heart disease, and cancer, and could lower the overall cost of health care. The direct and indirect cost of obesity is more than $450 billion annually.

Health care is about a $2.8 trillion industry.

Governor Thompson’s push comes on the first anniversary of the American Medical Association’s decision to formally recognize obesity as a disease.