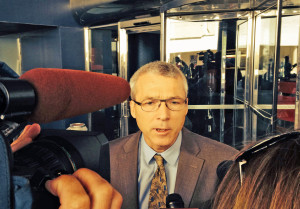 U.S. District Judge Barbara Crabb on Friday issued an order telling state officials to stop enforcing the state’s ban on same-sex marriages. Crabb then immediately issued a stay, which effectively halts same-sex marriages one week after she declared the state prohibition on such unions to be unconstitutional.

Crabb’s declaration last week resulted in confusion, and a flurry same-sex marriages. By week’s end, clerks in the majority of Wisconsin counties were issuing marriage licenses to gay and lesbian couples. Friday’s action will set up an appeal by the Wisconsin Department of Justice to the 7th Circuit Court of Appeals in Chicago.

“We’re very confident that ultimately we will prevail and the freedom to marry will be here for our plaintiffs, and everybody who would like to marry and has been denied that right for so many years,” said John Knight, an ACLU attorney representing eight Wisconsin couples, including three who were married outside Wisconsin.

Crabb ordered county clerks in Dane, Milwaukee and Racine counties, all of whom were named in the ACLU’s original lawsuit, to issue same-sex marriage licenses, and for the administration of Governor Scott Walker to treat same-sex couples like other married couples. But she made no statement on whether or not same-sex marriages performed over the past week will hold up in court.

“By staying this ruling, she has confirmed that Wisconsin’s law regarding same-sex marriage remains in full force and effect,” Attorney General J.B Van Hollen said in a statement.