You are here: Home / Environment / Conservation / DOT warns drivers to watch for deer 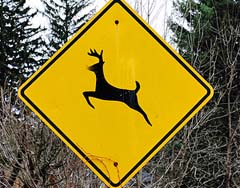 State transportation officials are urging motorists to be extra vigilant for deer this time of year.

While many people expect to see deer active around hunting season, state Bureau of Transportation Safety director David Pabst says June is actually one of the worst months of the year when it comes to crashes where people are injured. He says one reason for that is many people are expecting deer to be moving around in the fall and are a little more watchful, “but in the summer months they’re nothing about deer at all, so they just don’t notice them and hit them at full speed.”

If you hit a deer and it’s still in the road, call 911. Pabst says you should never leave your vehicle if it’s able to keep moving. He says “the most dangerous place to be is on foot and on the road” because of other traffic on the road. Also, Pabst says drivers should never attempt to remove a dead or injured deer on their own.