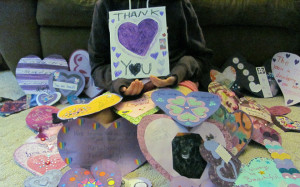 Photo released by the family of a 12-year-old Waukesha stabbing victim.

The family of a 12-year-old Waukesha girl, who was stabbed multiple times by two of her classmates, says their daughter is continuing to recover.

In a statement posted on a fundraising website, the family thanks everyone who has helped support the girl on her miraculous road to recovery. That includes the thousands of purple hearts from around the world she has received, and the nearly $50,000 in donations made through a fundraising website to help cover medical expenses. The family says they are “overwhelmed by the outpouring of love and support.”

The girl, whose identity is being kept secret at the request of the family, was stabbed 19 times on May 30. Two of her classmates, who are also 12-year-old girls, are accused of luring her in to a wooded area and attacking her as part of a plan to gain favor with an online fictional horror character, known as Slender Man. Both girls have been charged as adults.

The family also released a photo of the girl from the neck down, holding many of the purple hearts she has received. They say they continue to adjust to the new normal, as the girl “bravely deals with both the physical and emotional challenges since the attack.”