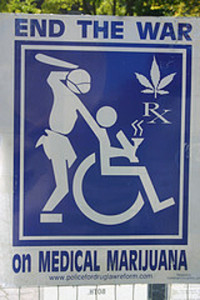 There may be some movement at the federal level, on how marijuana is classified. The Food and Drug Administration is conducting an analysis, to determine whether marijuana’s status as a Schedule 1 drug ought to be downgraded.

“This is really something that’s been kicking around now for forty-plus years,” said Gary Storck with the Madison-based group Is My Medicine Legal Yet. Storck noted that the initial attempt to reschedule pot was made in the 1970s. “We haven’t seen a lot of progress on it.”

The FDA is acting on the request of the Drug Enforcement Agency, but Storck said that should not be interpreted to mean DEA supports removal of marijuana from Schedule 1, a category that also includes heroin. “They are probably the most entrenched federal agency as far as marijuana prohibition is concerned,” Storck said.

He said there’s no way to know how long the review process may take. Storck and some other advocates believe marijuana should be treated like herbal medicines, for which the FDA has a special classification.